As press rolls in for Unbound Productions events, we will post it here with links to feature stories and reviews. Interested in creating some of your own Wicked Lit Press? Email Jonathan. 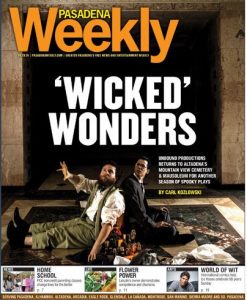 “Wicked Lit 2016 proves that, long after the novelty of staging plays in a cemetery has worn off, Unbound Productions can still deliver drama filled horror, pathos, and more than a few surprises.”
– Hollywood Gothique

“Another Run, Don’t Walk, Year! You may be tired at this point of reading raves about Unbound Productions’ extraordinary horror-themed theater Wicked Lit offerings, but you can’t be tired ofseeing their shows.”
– Creepy LA

“Each production is fascinating…the writing and the acting are top-notch!”
– Edge Magazine

“Wicked Lit is extremely challenging to describe to those who haven’t experienced it before. You throw out adjectives such as “beautiful”, “haunting”, “immersive”… and then chase it with, “And they do it in a cemetery and mausoleum.” That’s usually where the record needle scratch comes in the conversation.”
– Theme Park Adventure

“It wouldn’t be October in L.A. without… Wicked Lit”
– Stage Scene LA

“…should not be missed by anyone interested in an immersive and kinetic theater experience!”
– Culture Spot LA

“I think of Wicked Lit as a treasure to start the holiday season. You should too.”
– Pasadena Weekly

“Topping the Un-Toppable!
So this is not your reviewer’s first experience at Wicked Lit …but it may just be the best—and that’s saying quite a lot.”
– CreepyLA

“Wicked Lit is a stunning experience that has to be at the top of your To-Do list this season… and is one of the finest Halloween treats found anywhere in the United States.
– Theme Park Adventure

“Site-specific theater at its best!”
“…an annual theater event that Angelenos should put on their must-see list. Be sure to call for reservations.”
– Culture Spot LA

“‎Wicked Lit‬ is one of those amazing opportunities to feel the thrill of true fear, as if you were transported to another place and time… From the moment I arrived I knew this was going to be good; I had no idea it would leave me speechless!”
– Scary Horror News

“As good as any Broadway performance but with a much cooler setting.”
– Golden State Haunts

“UNBELIEVABLE! This is one of the best Halloween events I’ve ever been at!”
– Nightmarish Conjuring

LA Times – “People are dying to get in!” – featured event

“…while the writers who inspire the Unbound troupe are an eclectic bunch, the common ground they provide is a smart and scary experience. There is nothing quite like wandering through the dark and echoed chambers of the mausoleum after dark to watch a tale of madness unfold..”
– Pasadena Weekly Arts Feature, October 2, 2014

“It is a wonderful night of theater with a dark and sinister twist. It isn’t the scariest haunt out there, but it’s one of the loveliest. Perfect for that sexy librarian in your life.”
– LAist, September 26, 2014

“There is nothing else quite like Wicked Lit by Unbound Productions. A triptych of horror stories unfold within gasping distance of an audience led along darkened marble hallways lined with crypts and through the granite tombstones of Mountain View Cemetery and Mausoleum.”
– Examiner.com, September 20, 2014

… L.A.’ s Wicked Lit has fast become one of the city’s most buzzed about October attractions… This writer took in one of their shows last year and found it to be one of the more impressive experiences in the Halloween season.
– Dread Central, September 22, 2014

“The past 5 years have indeed been remarkable for Unbound Productions and I salute the group’s co-artistic directors on their ability to weave classic literature into such entertaining and immersive theatrical experience… I can see why the shows sell out every year!”
– BroadwayWorld, October 29, 2013

“Wicked Lit’s Best Halloween Theatre Festival Ever! …you must – absolutely must – head over to the Mountain View Mausoleum in Altadena for the 2013 Wicked Lit! We cannot recommend it highly enough.”
– Hollywood Gothique, October 6, 2013

“Now in its fifth year, and in its fourth year at Mountain View, Wicked Lit takes audiences in and around the grounds to experience new adaptations of classic horror literature.”
– LA Stage Times, October 16, 2013

“Act fast for standby tickets to Wicked Lit…very clever and using its terrain so delicately and observantly that at times you feel as if lost in some sort of psychic realm where time flies by effortlessly.”
– LA Beat, October 17, 2013

“Nothing could be more perfect for Halloween”
– Pasadena Now, October 6, 2013

“The acting, sound deign, costuming, lighting and everything else was exceptional and surpassed m y  expectations… There  were moments where your are left in the dark with nothing but a string  to guide you through and believe me, that gets scary! In a good way  though, don’t be a baby!”
– Sinful Celluloid, October 10, 2013

“The 2013 series is the fourth season at Mountain View and the fifth season for Co-Artistic Directors Jonathan Josephson, Paul Millet and Jeff G. Rack to scare the bejeebers out of their audience.”
–The Examiner (The Masque of the Red Death preview), September 15, 2013

“I was lucky enough to attend the event last week and I must say, it surpassed my expectations. Honestly… I must reiterate that this event mostly takes place inside a real mausoleum!”
– Geek Nation, October 11, 2013

“Unbound Productions… (has) an eerie and atmospheric line-up for the 5th anniversary production of the popular horror story adaptation series Wicked Lit…”
–The Examiner (preview), September 15, 2013