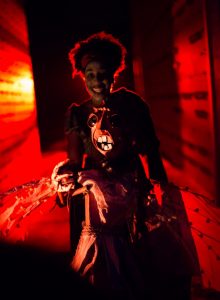 The Damned Thing
Adapted by Jeff G. Rack
Directed by Sebastian Munoz
From the short story of the same name by Ambrose Bierce

A man is part of an investigation into his own mysterious and brutal death. When the dead man’s friend becomes a suspect in his murder, he uses his newfound spirit powers to discover who – or what – really killed him.

Set in 1972 Altadena, three adventurers and their sidekicks are on the hunt for one of the most sought after artifacts of ancient history – The Book of Thoth. The Book is said to grant the reader magical abilities and limitless power. As the adventuring pairs pursue the Book, deeply kept secrets and painful lies are revealed as an offbeat archaeological expedition becomes a race between life and death.

Modern reason clashes with the occult in this classic 1882 ghost story thriller. It’ll take a village to get to the bottom of the nefarious happenings taking place in the abandoned ruins, and with a young boy’s life in the balance, there is no time to waste.

Welcome to Liliom – the first stop after death, on your way to either Heaven or Hell. Though for some, Liliom is the final destination.

All performances will begin promptly at 7:30 p.m.
Tickets range from $40-80, see website for details.
Backstage Experience passes will be available for an additional $25.

DO NOT ENTER FROM FAIR OAKS AVE ~ YOU MAY GET LOST
– PLEASE PLAN AHEAD
THIS IS A WALKING PRODUCTION THAT TAKES PLACE AT NIGHT
PLEASE WEAR COMFORTABLE, SOFT-SOLED SHOES
SOME SCENES STAGED OUTSIDE ~ PLEASE DRESS ACCORDINGLY
THIS PRODUCTION IS MEANT FOR MATURE AUDIENCES AND WILL BE SCARY!
PLEASE INQUIRE ABOUT TRIGGER WARNINGS –
SEATING IS LIMITED – THESE SHOWS WILL SELL OUT!