Staged readings of three Wicked Lit plays:
From Beyond, The Unholy Sisters, and The Grove of Rashomon
GET TICKETS 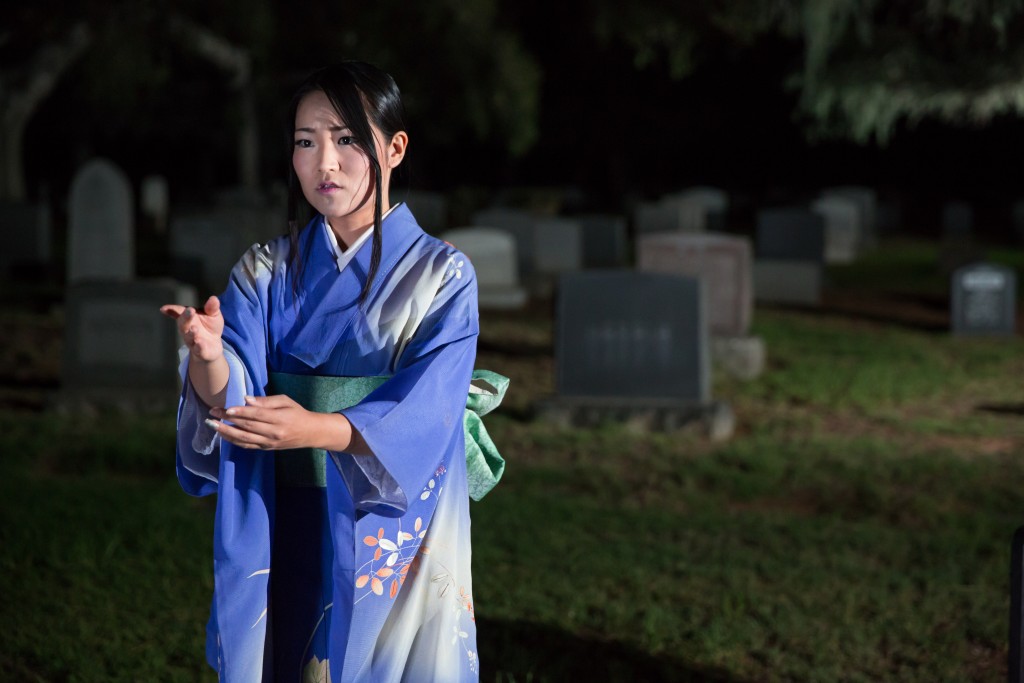 Alpha Takahashi in The Grove of Rashomon. Photo by Daniel Kitayama

Stories of darkness and horror are as old humanity, and just as universal. Journey with us through three short plays inspired by the darker side of storytelling – meet a scientist who has broken through a new plane of existence in a Lovecraftian thriller; take a journey alongside a fanatical Medieval inquisitor on his hapless search for witches; and travel to 13th Century Japan to relive a haunting, harrowing tale of violence from a multitude of perspectives.

From Beyond, featured in Wicked Lit 2016
adapted by Trey Nichols
from the story by H.P. Lovecraft
directed by Shaina Rosenthal

The Grove of Rashomon, featured in Wicked Lit 2015
adapted by Jonathan Josephson
from the short story “In A Grove” by Ryūnosuke Akutagawa
directed by Darrell Kunitomi
GET TICKETS

THANK YOU FANS AND FRIENDS FOR
ANOTHER SOLD OUT RUN OF WICKED LIT!

The Chimes: A Goblin Story – New Production
By Jonathan Josephson
Directed by Darin Anthony
Adapted from the novella of the same name by Charles Dickens

“An unforgettable night of smart and chilling theater
… one of the best treats of the Halloween season!”
– Culture Spot LA

“…both plays were genuinely beautiful.”
– No Proscenium

“Get yourself to Wicked Lit!”
– Nightmarish Conjurings

Wicked Lit: Volume I
Purchase Here >>
Includes the Wicked Lit adaptations of The Body Snatcher, The Cask of Amontillado, The Chimes: a Goblin Story, The Grove of Rashomon, The Legend of Sleepy Hollow, Las Lloronas, The Monkey’s Paw, The Tell-Tale Heart, and The Unnamable.

Wicked Lit: Volume II
Purchase Here >>
Includes the Wicked Lit adaptations of A Ghost Story, Anansi and the Demons, The Doll, The Ebony Frame, The Fall of the House of Usher, From Beyond, The New Catacomb, The Shadowy Third, and The Yellow Wallpaper.